F1 technology: Why Mercedes doubts the radical concept of the W13

Mercedes caused a stir in Bahrain by showing a car that had virtually no sidepods. The emergence of the World Constructors’ Champion was radically different from what its rivals had shown. It raised eyebrows, but it wasn’t going to make a smashing sequel. The potential that undoubtedly lies in the car is largely blocked suggest† Mercedes has introduced several upgrades to address impact, but so far to no avail. The only effective solution is to increase the ride height, but that’s not what teams want. The suction effect of the ground effect is then lower, so that there is less downforce under your own car and lap time is lost.

It puts all options on the table. Of course, Toto Wolff and his colleagues would love to make the current concept work, but the Austrian acknowledges that a return to the more conventional design from the first week of testing is also possible. As you know, this first week of testing was completed at Barcelona, ​​so Mercedes has a lot of data from the W13 with larger sidepods at this track. That makes this weekend a very important one to compare things and ask the question, ‘which direction should we go for the rest of the season?’ Answers.

The first part of this question is whether Zero-Pod the way forward is whether the return to the specification from the first week of testing can do more. The more Mercedes dives into the W13’s problems, the more the team gets the idea that Zero-Pod (in its current form) is part of those problems. The almost complete elimination of sidepods means that much more floor space is exposed than competitors and this part is the most sensitive part of the car thanks to ground effect. “If you walk across the grid, you can see that the sides of our floor are much more exposed than those of the competition. It somehow creates a lot more instability, ”said team boss Wolff. “That’s where our concept differs from other teams. The car from the first week of testing in Barcelona is slower on paper, but we have to see if we can get the current car to work in a way that the drivers can predict.”

In fact, as can be seen in the image above, Mercedes shows more floor space than the competition. According to Mercedes, removing the sidepods would optimize airflow and spread the pressure over a larger part of the floor. While that should have provided aerodynamic benefits, according to Wolff it actually makes the floor concept more sensitive and that would partly explain why motorists struggle with porpoises even at relatively low speeds. Since the problem occurs at low speeds, the bouncing lasts longer in the braking zones as well. It marks an important difference with the Ferrari, which also bounces on straights but is instantly stable under braking. The Mercedes car is not and is therefore unpredictable.

In addition to the sensitivity of the exposed floor space, Mercedes has found another weak point in its own concept. As all teams struggled with porpoises to some degree after the first days of testing, the FIA ​​allowed a metal support on either side of the car just in front of the rear wheels. This support is intended to limit the deflection of the floor and thus prevent the floor from collapsing barn Touches so characteristic of harbor porpoises.

On Mercedes you can see that these supports are longer than on other cars and they don’t go through the body – see the red arrow in the picture above. The supports are a necessity for Mercedes, while for some other teams it was a question of either or. Some formations had initially added extra weight to the floor to prevent sagging, but were able to save that weight with the metal supports. 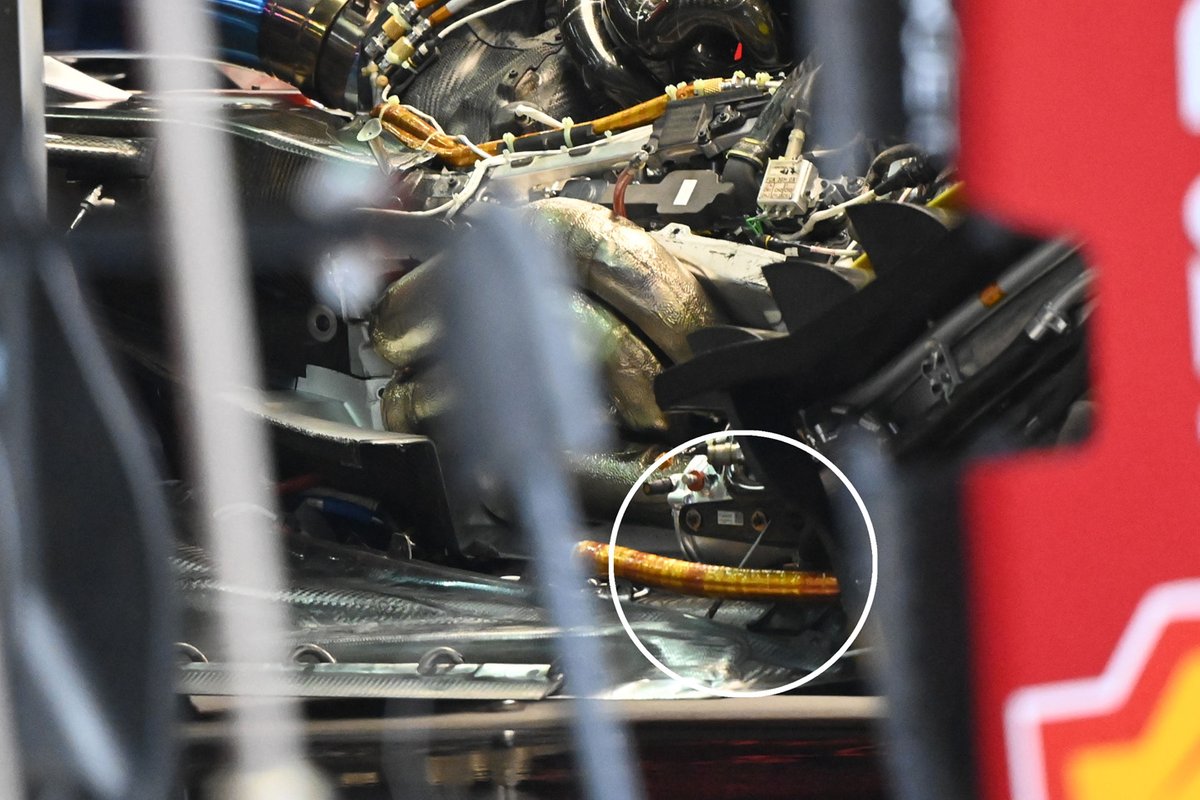 That’s not the case with Mercedes, although the zero-pod concept still has one downside: the lack of “hidden supports.” These supports are completely hidden in the body of the sidepods, as shown in the photos of Red Bull (below) and Ferrari (above). It gets teams talking about hidden supports, although the importance of this cannot be underestimated. The metal supports provide extra stability in an important point: closer to the center of the floor. 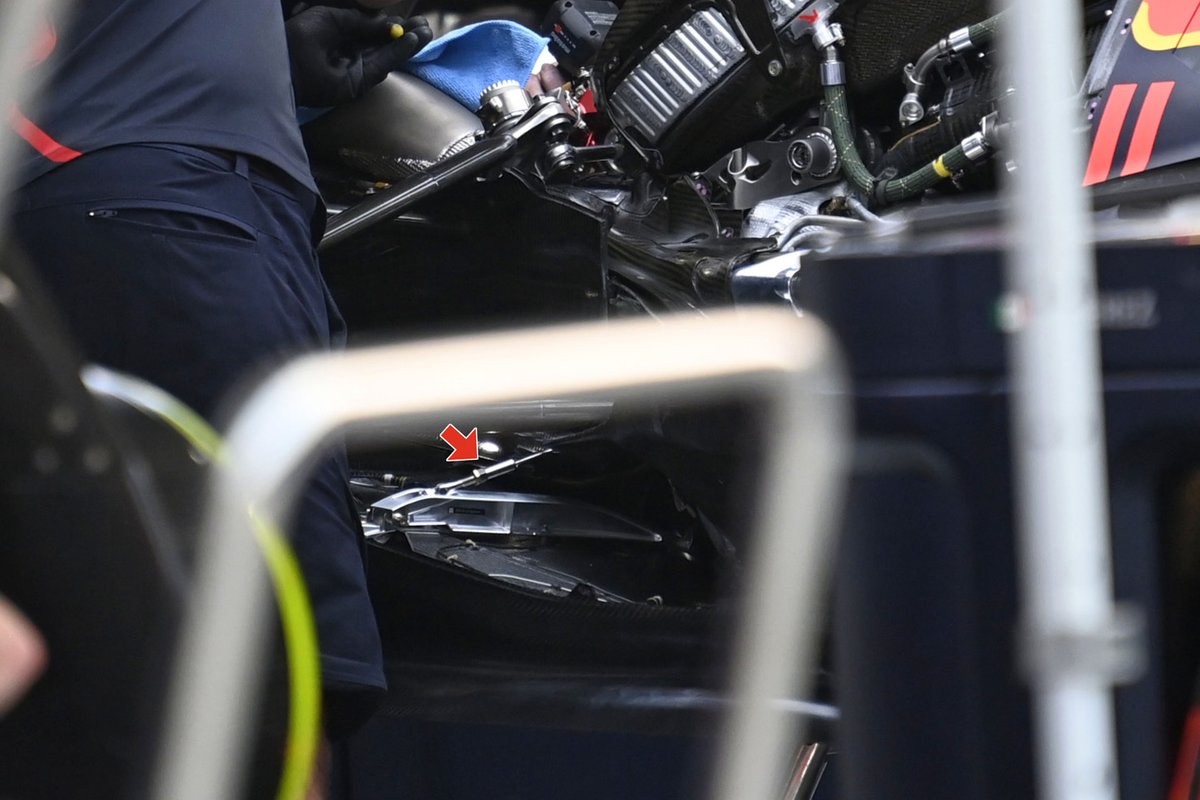 Since these mounts are not exposed to the wind, they are not subject to the restrictions of the FIA-approved mounts. Teams have freedom and this freedom is used optimally. For example, some teams placed several supports under the body. As can be seen in the photo above, Red Bull has opted for a single but slightly more complex construction with different arms.

Due to the lack of side boxes worth mentioning, Mercedes cannot use these solutions. A return to Barcelona creation would give the star brand more tools, although solving porpoising – like the diva behavior due to low rake in 2017 – isn’t easy. It should not be forgotten that Mercedes also suffered from porpoises in the first week of testing (and thus on the Barcelona sidepods). Also, these sidepods are designed so slim that the rear part of the floor is actually just as exposed as with the current approach.

After all, all previous upgrades – including those already in the pipeline – are geared towards the zero-pod concept. By choosing the Barcelona variant, Mercedes would literally take a step back not only in terms of potential but also in terms of development. It means that Mercedes doesn’t want to make such a choice overnight and that Wolff has it low on his list of options. But the more of the other options disappear, and the longer Mercedes literally and figuratively hobbles behind the facts, the fewer emergency measures are eliminated.

The Barcelona weekend will definitely provide valuable data as this track is the first track where Mercedes can compare both concepts. After that, the winning team of previous years can make a more considered choice, at least for the rest of the season.

Russell escaped crash: ‘I was playing with fire’